Chapter 2 of “The Visual Toolbox” is about asking better questions.  And this is something I am remiss at.  Instead of thinking about the shot, I just start shooting.  Instead of visualizing what I want the result to be, I snap away.  However, lately, I have been meeting with the pet’s family first to get to know the animal without the camera, asking questions of them, such as where they might want the photos to be taken (either at their home or another location), etc.  Then I ask myself the questions I need to ask to get the photos I envision for the actual photo session which could be a week later. (NOTE: Of course, when that day comes, sometimes the pet has a different idea).   This assignment is to take the photos we presented last week in the “Consider Your Vision” assignment and consider some deeper questions.  In reading this very brief chapter, one quote caught my eye: “Do not let (the questions) paralyze you.  There is no right answer, only possibilities, some of which will work better than others.  Forget practice, learn to play.  You’ll learn better that way.  Don’t fear failure.  Experiment.”  Those bold words were written for me, I know it.

This photo shows poor composition, I was not at the pets’ level, and, of course, there’s that harsh flash from the point and shoot filling the cat’s eyes.  A pet carrier and water dish may have worked, but not in this picture. 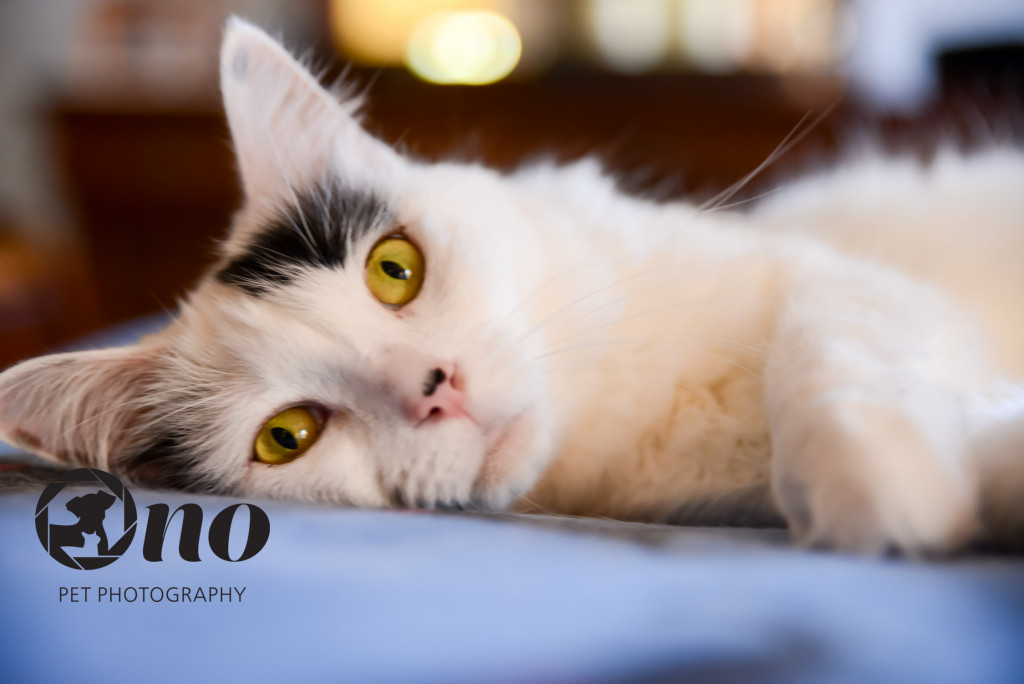 I had just purchased my new DSLR with a really superior lens as compared to my previous camera.  I wanted to get close, but I think this is a little too close since I don’t feel the eyes are in full focus.  And the light reflected in the mirror is distracting.  Should have taken this from a different angle. 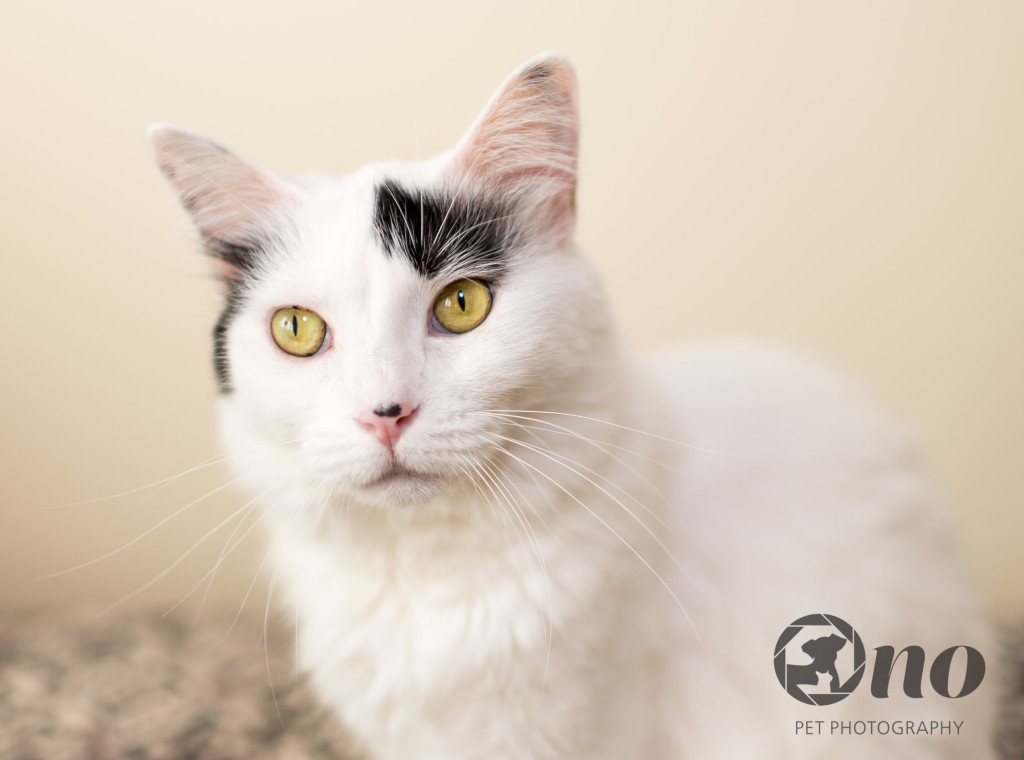 This photo was taken in one of the front rooms of the house where there is natural light.  But I used my Nikon speedlight with a cool diffuser (called the Lite Scoop II) which really spreads the light very nicely.  OCF and/or strobes might give it an even different look.  I do have the radio triggers for OCF, but that’s a learning curve for me right now.  As for strobes, not sure… but it’s something I’ve done in the past at workshops and I enjoy it. All and all, I am happy with this photo. 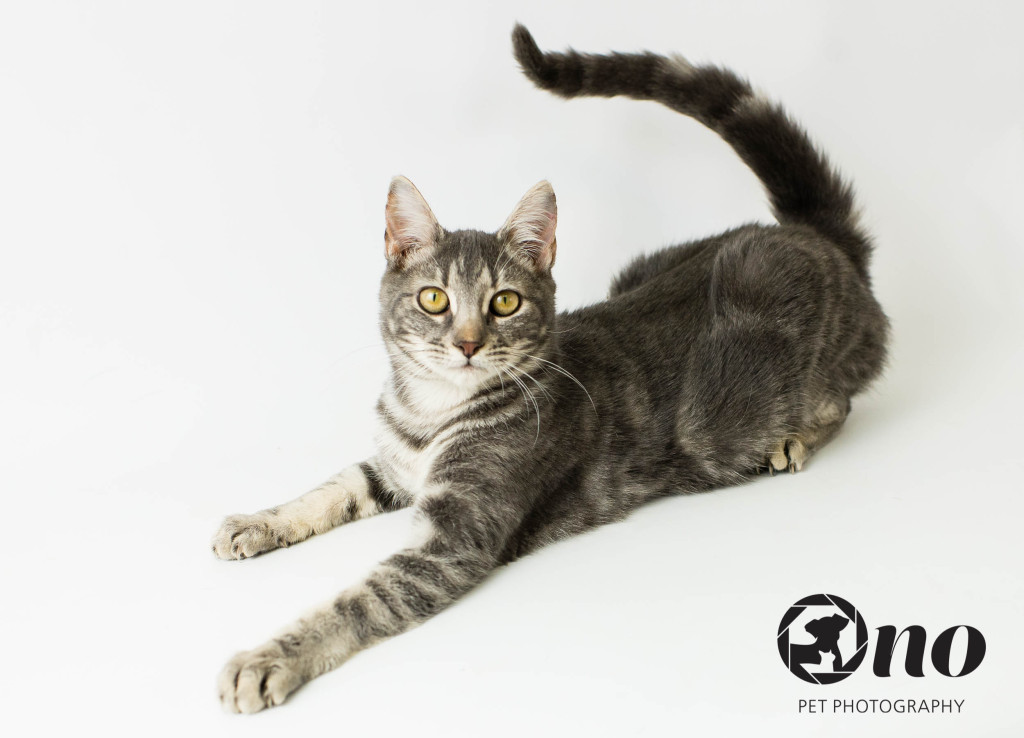 This photo was taken with a TD6 continuous light stand (with a 36″ x 48″ soft box) on the left side and a 5′ reflector panel on the right side.  I always use my 35mm prime lens for these shelter shots.  For this one, the speed was at 1/640, f4.5 (since I didn’t want it too soft) and ISO at 640.  I’ve learned that this shutter speed for me is the best as the animals can be a bit lively; sometimes have to adjust up or down depending on the situation, like the color of the animal.  I’ve been doing shelter animals for several years and, what I’ve learned, is that your camera settings and the lighting have to be ready to go as soon as the animal is brought into the room.  Yes, it may take a few moments for them to calm down but, basically, while shelters do a great job, it’s not the best place for a stray to be and they are bound to be skittish or scared.  In addition, shelter pets can become even more stressed from the photo session.  So, it’s good to be accurate but quick.  This is Mickey and, lucky for me, he was as cool as he looked.  Strobes might have given it a different look, but I’m very happy with it.

This is Old Dan (he’s actually 1-1/2 years) and he was at the end of his photo session.  Even a lively dog can get tired!  Taking a photo of a brown dog on green grass can make it look rather dull. I’ve learned that a pop of color can really make the photo stand out.  Fortunately, the owners azalea’s were in bloom.  The owners loved this photo.  I tried to remove the blades of grass by his nose, but I’m not fully PS proficient (but I can remove a leash or eye goop like a pro!). 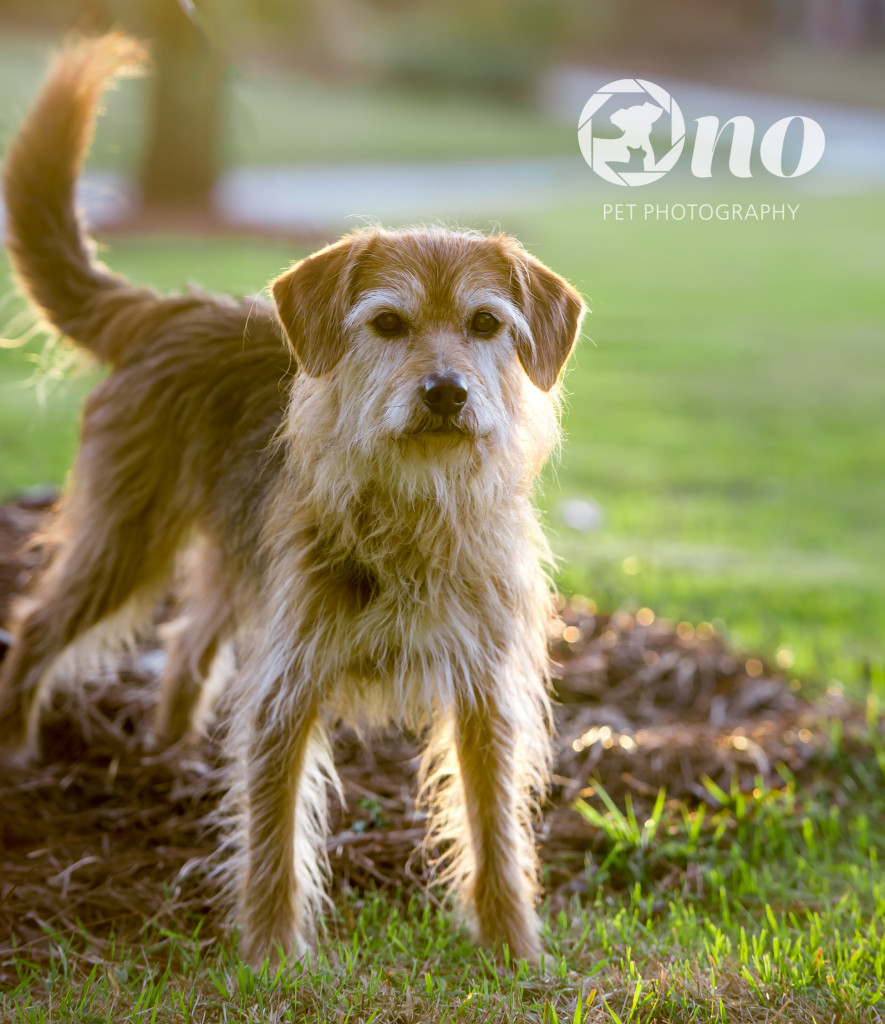 This is a photo I took this past week of my dog, Chloe, with about 5 minutes of sunlight remaining.  I wanted to practice backlighting and I’m not sure I nailed it.  I used my 70-200mm lens (at 135mm) which is a lens I really need to practice on.  The aperture was at f3.2 – I wanted a decent depth of field to blur out the back which is just our subdivision’s street and part of a neighbor’s yard.  I’m not too happy about the pine straw at her feet, but I needed to secure her to one of our front trees (they all have pine straw around them).  I got down on the ground, trying to maneuver into a position with some trees between me and the setting sun.  Kind of hard since there aren’t too many leaves on the trees right now.  In order for her face to have been a little more bright, I probably could have used an OCF (if I was proficient with it), or my Nikon speedlight with diffuser.  I could have put a reflector near me, but I was alone, the sun was setting fast, and Chloe was a skirmy worm.  Just have to keep practicing.

Only two chapters into this book, and there’s a ton to reflect on.  Click here for Pet Love Photography to see her interpretation of this chapter.

If you live in the Gulf Shores area – Mississippi, Alabama, Florida – contact me for a professional portrait of your pet at onopetphotography.com